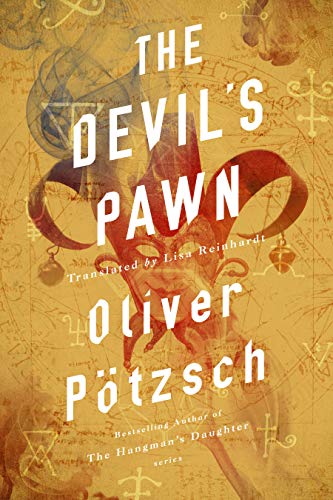 A showman’s fate is in the hands of the devil in an enthralling novel inspired by the Faust legend from the bestselling author of the Hangman’s Daughter series.

Rome, 1518. The church is tarnished by greed. Peasants are rebelling. Tumultuous times demand drastic recourse—before the devil gets his due.

Johann Faust is a renowned magician, astrologer, and chiromancer traveling through Germany with his successful troupe: the orphaned juggler Greta and his loyal companion Karl. The avaricious Pope Leo X now requires Johann’s services to replenish the papacy’s drained coffers through alchemy. But the devil, with whom a regretful Johann once agreed to an unholy trade for fame, wants something else. Racked with paralyzing seizures, Johann fears that his debt is nearer to being settled.

In France, Johann hopes for answers from an eminent new friend who could hold the key to his torment, body, and soul. For the celebrated artist, inventor, and anatomist Leonard da Vinci is suffering from the same accursed malady. Time is not on his side either.

Now they all must outrun the devil, and the more human threats of the papal henchmen, before Johann is dragged straight to hell—along with everyone he holds dear.